One of the most scenic countries in the world, Ireland is known for its unique and captivating beauty. While the country’s cities may be where visitors spend most of their time, the smaller towns reveal just how stunning and charming Ireland can be. From medieval castles to unique botanical gardens, the 10 most beautiful towns on the Emerald Isle have a lot to offer. 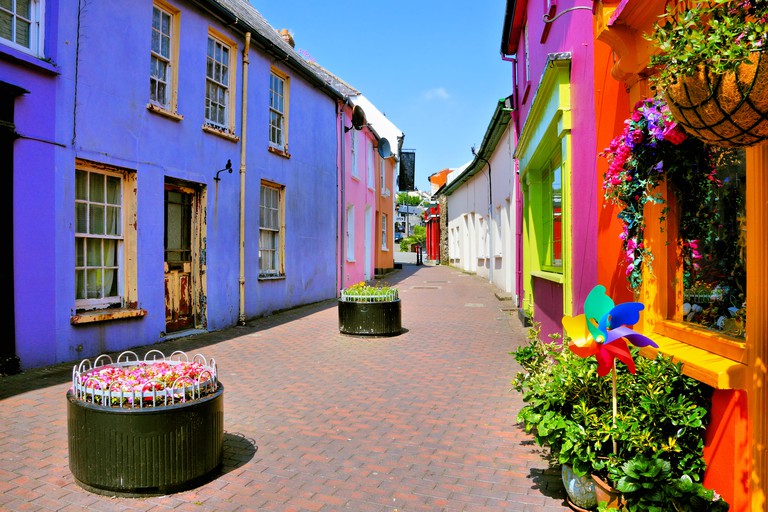 Located on Kinsale Harbour, Kinsale is a historical fishing town on the Bandon River. The town’s narrow streets are decorated with charming shops, galleries and pubs, providing a peaceful oasis away from the hustle and bustle of Cork city centre. The old ring fort provides spectacular s of the harbour and of Kinsale. The yacht club and marina also attract annual visitors, with numerous fishing boats regularly bobbing in the inlet. The town also hosts an annual arts festival, which is well worth a visit. 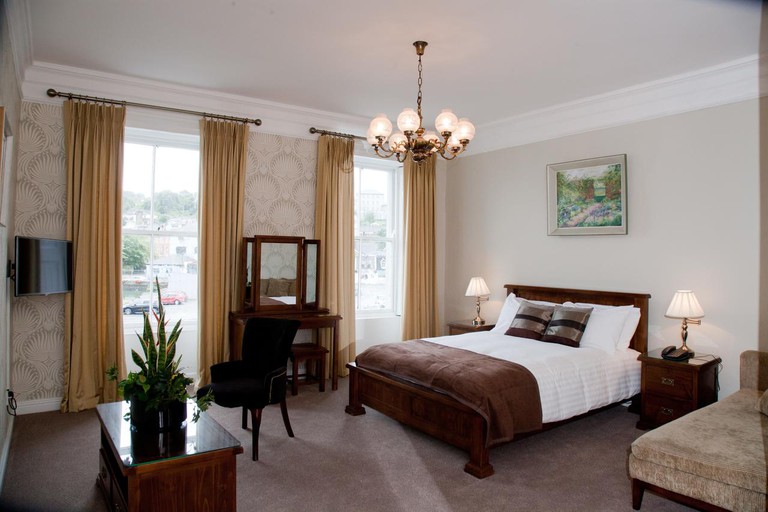 Housed in an enormous Georgian property, Long Quay House will have you feeling like the lady or lord of the manor. Throw open your enormous wooden shutters in the morning to take in s over the harbour with your coffee, after which you’re a short stroll from all the sights and restaurants in the centre of Kinsale. Your friendly hosts Peter and Rosa are more than happy to fill you in on their favourite local spots too. 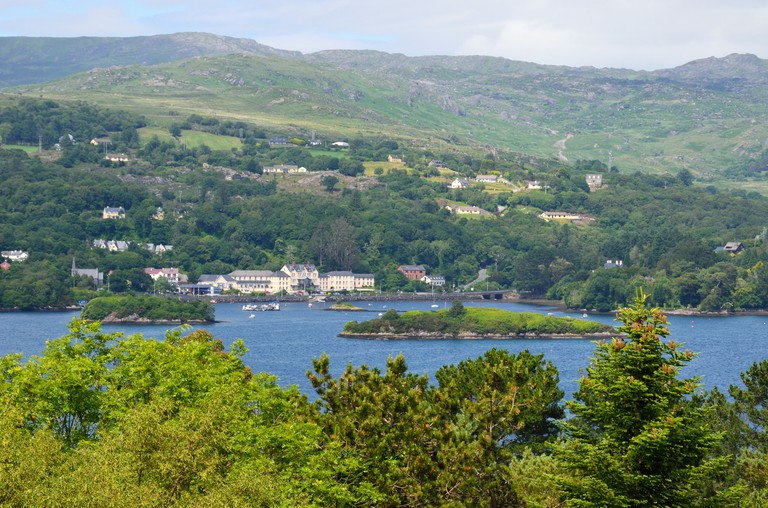 Meaning ‘rough glen’, Glengarriff is situated on the Beara Peninsula in Cork. It is a renowned tourist location thanks to spectacular s and picturesque landscapes. The town is surrounded by rugged mountains that are home to Lady Bantry’s Lookout, which provides an amazing vista of the area. The town itself offers visitors a wide variety of shops, galleries, pubs and restaurants. 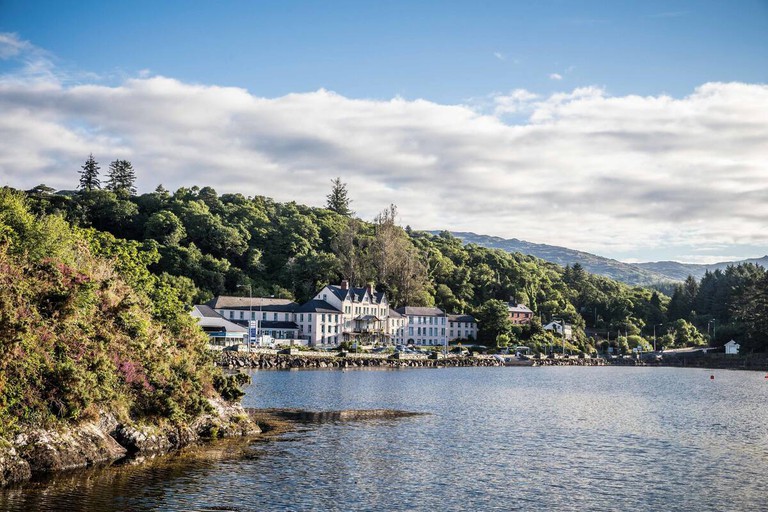 Set on the shores of Glengarriff Harbour, the site of Eccles Hotel and Spa has accommodation records dating back to 1745. Its present-day iteration is a mesmerising place to stay with plenty to explore in the surrounding area. After an active day of sea kayaking on the bay or cycling along nearby trails, you can return to a soothing massage in the spa and fresh seafood with bay s at Garinish Restaurant. 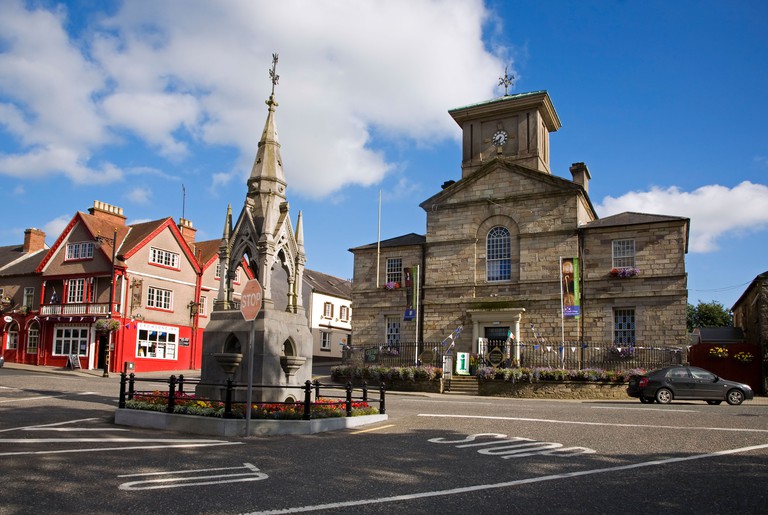 Found at the foot of the Knockmealdown Mountains, Lismore is a historical town in Waterford. The town’s main tourist attraction is its 800-year-old castle, which is situated on the site of the town’s old monastery. Built during medieval times, the imposing castle is located on a steep hill, providing impressive s of the town and neighbouring Blackwater Valley. Important artefacts from Lismore Castle include the Book of Lismore, now located at Chatsworth House in Derbyshire, and the Lismore Crozier, now housed in the National Museum of Ireland. 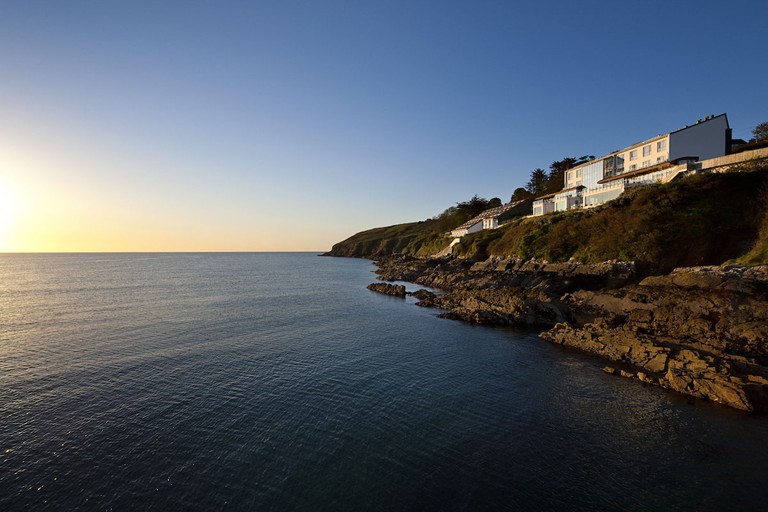 Looking out over the ocean, at the junction of a number of spectacular coastal walks, Cliff House Hotel seems to sit at the edge of the earth. The modern rooms are simple and homely, but don’t skimp on the details that matter, like cushy armchairs positioned next to floor-to-ceiling windows with sea s. Dining at the hotel’s one Michelin-star restaurant is an experience unto itself. Book a table on the enormous terrace, set above the rocks, and dine on a seasonal tasting menu of freshly caught seafood with the ocean swirling below. 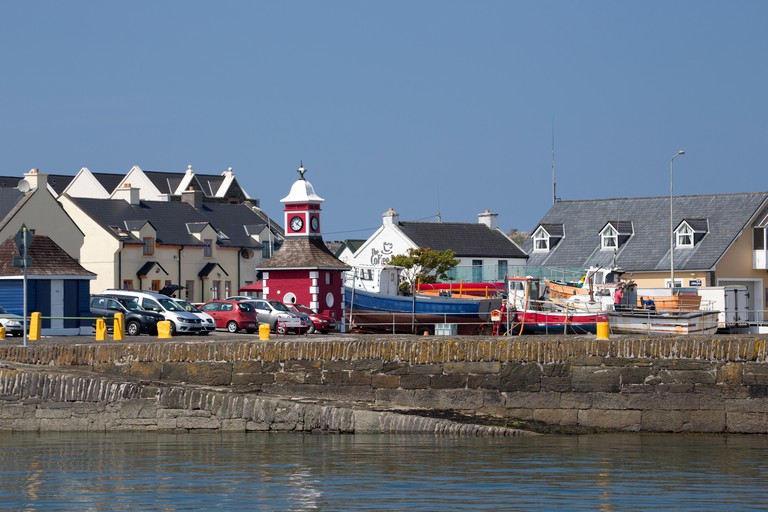 Valentia on Valentia Island is located on the Iveragh Peninsula in the southwest of Ireland. The island is connected to the mainland via a bridge from Portmagee, as well as a car ferry from Reenard Point. In 1993, fossilised footprints dating from 385 million years ago were discovered and are some of the oldest remnants of vertebrate life on land in the world. Another key attraction in Valentia is the beautiful Glanleam House and its sub-tropical gardens. Due to their geographical location, these gardens have a unique microclimate and, as a result, house a collection of rare plants. From Valentia, you can also travel to Skellig Michael, an ancient monastic island. 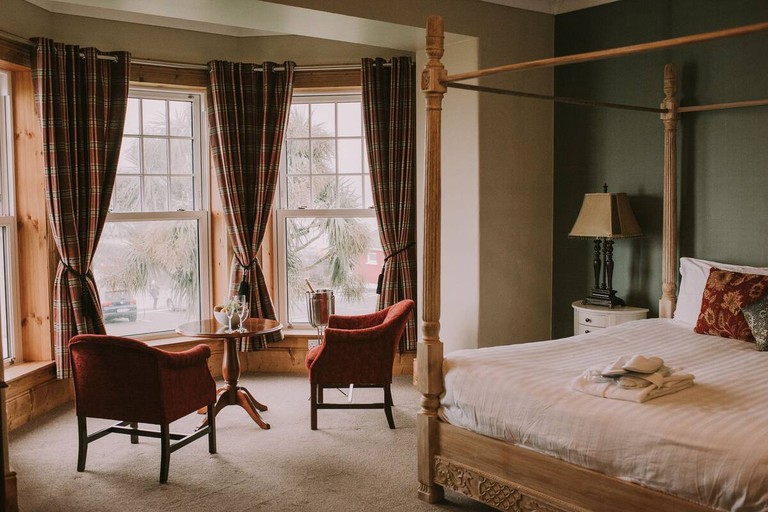 The enormous Gaelic-inspired rooms at the Royal Valentia have four-poster beds, thick drapery and tartan textiles. Opt for a sea- room to wake up to the sight of rolling waves in the morning, and in the evenings cosy up at the window with a whiskey for some stargazing. Found in an International Dark Sky Reserve, the hotel is one of the best places in the world for admiring the night sky. 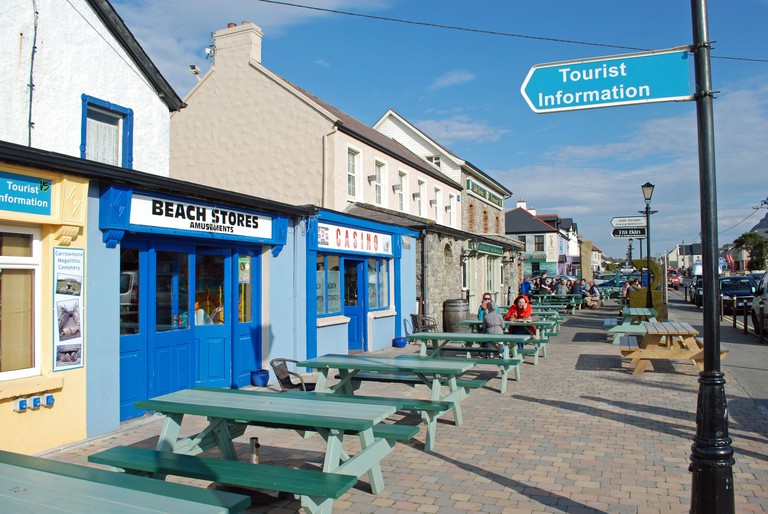 Strandhill is known for being a surfer’s haven. The coastal town is situated at the western base of Knocknarea Mountain, which is west of Sligo town. For history enthusiasts, the 200-year-old traditional thatched cottage called Dolly’s Cottage is an interesting visit, as are the megalithic tombs of Carrowmore, which are some of the biggest in the country. There are also a number of festivals held in Strandhill, such as the Warrior Festival. A stay in the award-winning Strandhill Lodge and Suites is guaranteed to make your visit to Strandhill a memorable one. 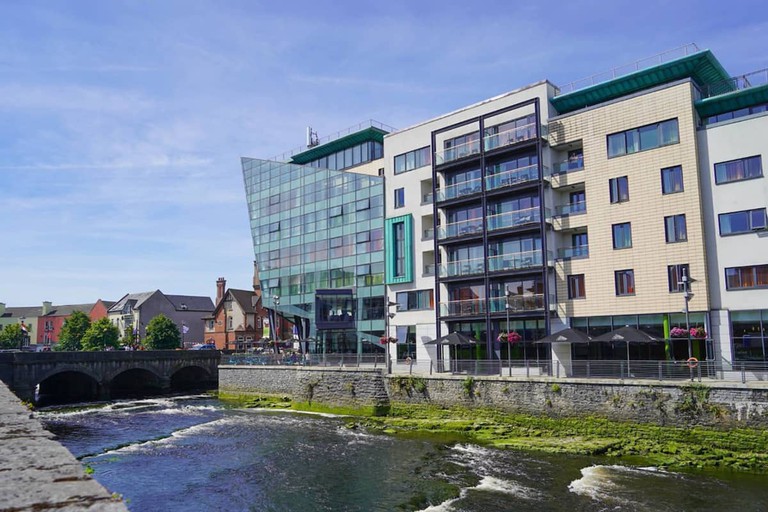 Courtesy of The Glasshouse / Expedia

Considering that it’s sitting on a river and built to resemble a ship, you’d perhaps expect the Glasshouse to be rife with nautical influences. The opposite, however, is true here. Ultra-modern inside, the hotel features pops of colour throughout, from one bright-orange room all the way to the vivaciously decorated bar and restaurant. With two bars and a fine dining restaurant on the premises, there is much to be consumed within the hotel’s (glass) walls, and there are a number of beautiful walks in the area to help you work up an appetite. 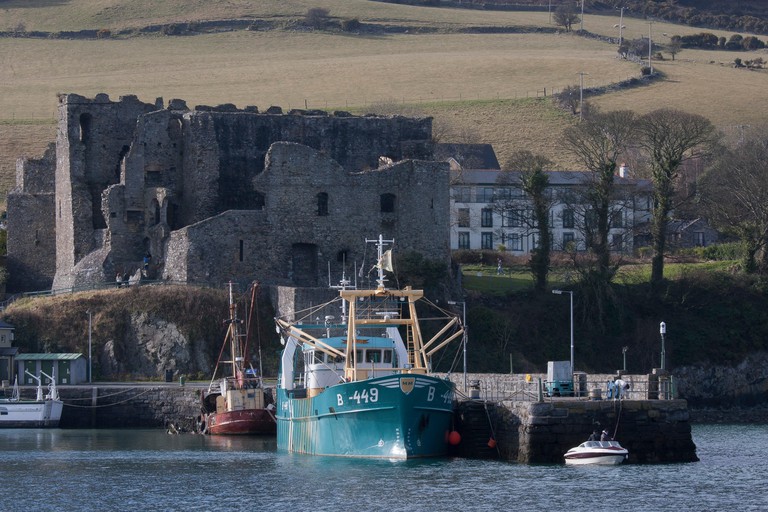 The name of the town Carlingford is derived from the Old Norse meaning ‘narrow sea-inlet of the hag’. Over the years, the town has managed to maintain its Viking heritage, with many of the town’s streets showing evidence of the medieval age. One example is the Tholsel or ‘town gate’, which is one of the very few left in Ireland. The gate was originally taller than it is now, but there is still evidence of its original function as a town jail and toll. The heritage centre displays the history of the town, from the Viking and Norman days to the present. The town itself is located between Carlingford Lough and Slieve Foy and, as a result, has spectacular panoramic s. Carlingford is also known for its fishing, as oysters and crabs are often the catch of the day from the nearby harbour. There is also an annual Carlingford Oyster Festival that celebrates the town’s sea cuisine. 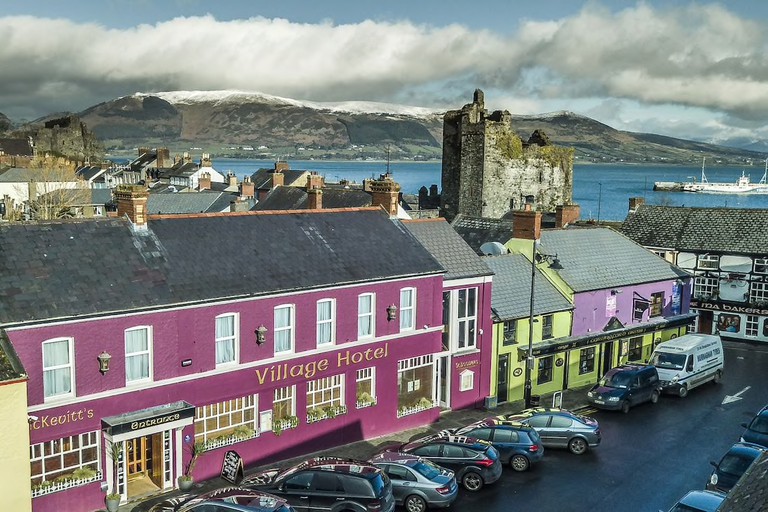 It’s hard not to notice McKevitts Village Hotel, which is striking from the get-go thanks to its gloriously fuschia building. Inside, there are a number of secret little corners to hide away with a drink or a meal of locally caught seafood chowder, be it in the traditional-yet-upbeat pub or the fairytale-like outdoor patio. Rooms are homely and comforting while still feeling a little bit special, and they come with breakfast included so you can fuel up on a full Irish or traditional smoked kippers before a day wandering around the adorable town. 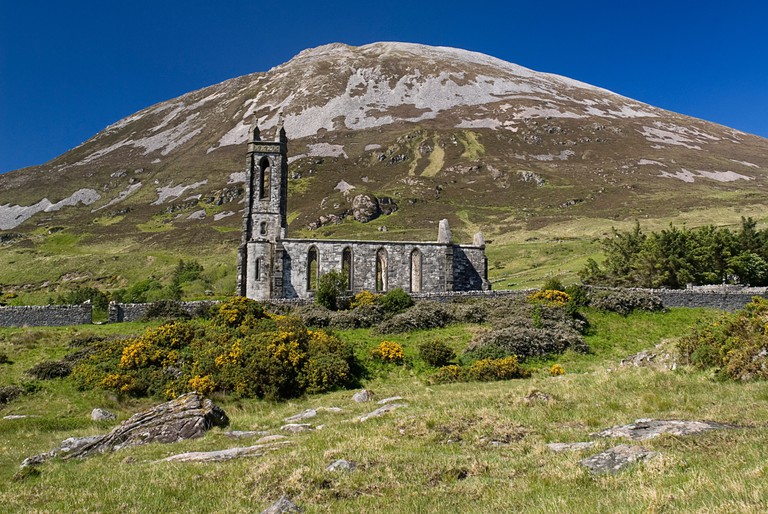 Gweedore is a Gaelic-speaking town in Donegal in the northwest of Ireland. Gweedore is also the largest Irish town where residents speak Irish and, as a result, is a cradle of Irish culture. The area is also known for its breathtaking scenery of long sandy beaches and mountains. A notable site in Gweedore is Glenveagh National Park, which is the largest national park in Ireland. Looking out to sea, visitors will spot many small islands, such as Gola and Tory islands. Evidence of the area’s harsh weather conditions is visible on Magheraclogher Beach with the famous shipwreck ‘Friend of the Sea’. 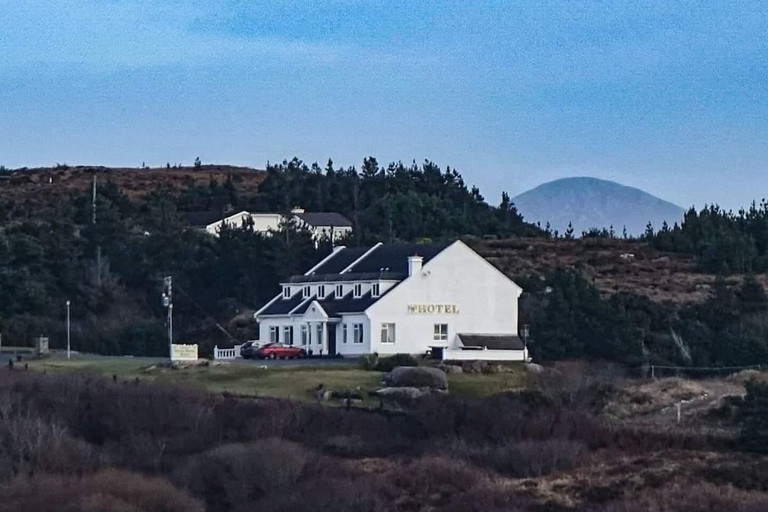 Make the most of the spectacular Wild Atlantic Way with a stay at Carey’s Viking House Hotel, hidden among the greenery above the crashing ocean. Opt for a room at the front of the house for sprawling sea s, where you can watch the waves batter the coast from the warmth of your bed. Regular live music in the bar downstairs is the perfect way to delve into the local community while meeting fellow travellers and sipping on a perfectly creamy Guinness. 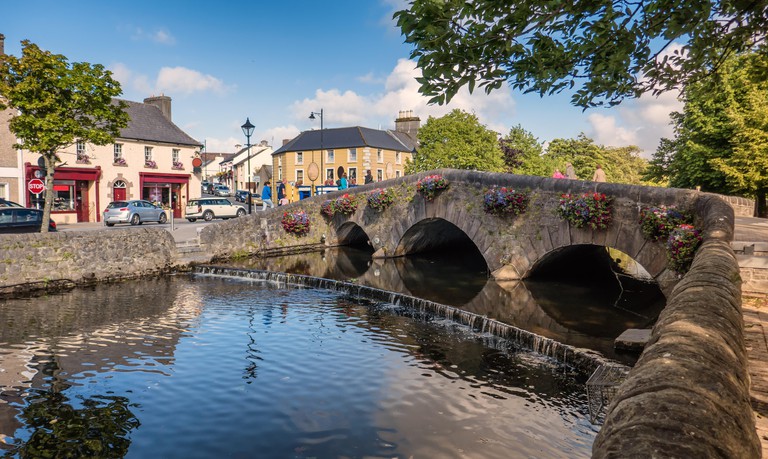 Situated on the southeast corner of Clew Bay, Westport is one of the few planned towns in Ireland. The town centre was designed by the architect James Wyatt in 1780, and the town is a prime example of Georgian architecture. The design cleverly incorporated the river into the town, and it features quaint streets and promenades lined with trees. There are several small bridges over the Carrowbeg River, which further add to the town’s charm. The town is also home to Westport House, which was once the stately home of the Marquess of Sligo. The house was built on the site of the O’Malley Castle, and the dungeons of the castle still remain. Westport is also located near the famous pilgrimage mountain of Croagh Patrick, known as ‘The Reek’, which attracts hundreds of visitors every year, particularly on ‘Reek Sunday’. 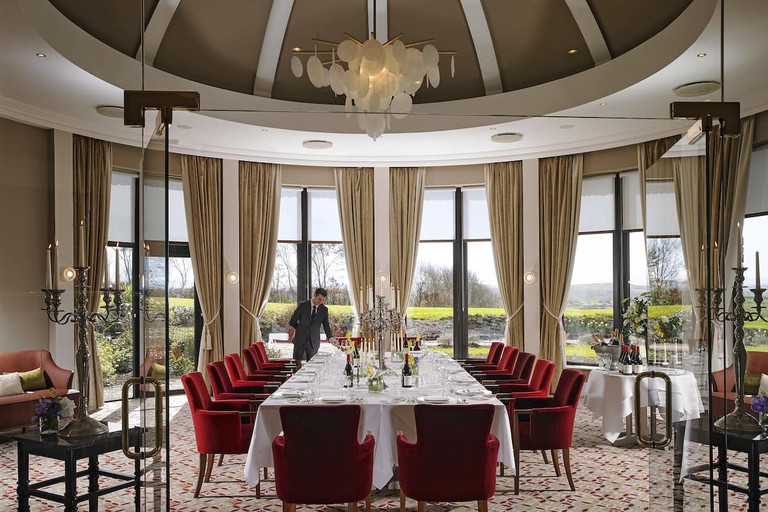 Classic, elegant and sitting in an incredible location, Knockranny House Hotel is a jaw-dropping spot. Its restaurant makes the most of it with panoramic windows and the opulent bar – centred around a grand piano – creating the perfect place for a decadent nightcap. The grandeur has also made its way to the rooms, where you can expect enormous mahogany four-poster beds, luxurious drapery and art deco touches like gilded lamps and mid-century furnishings. 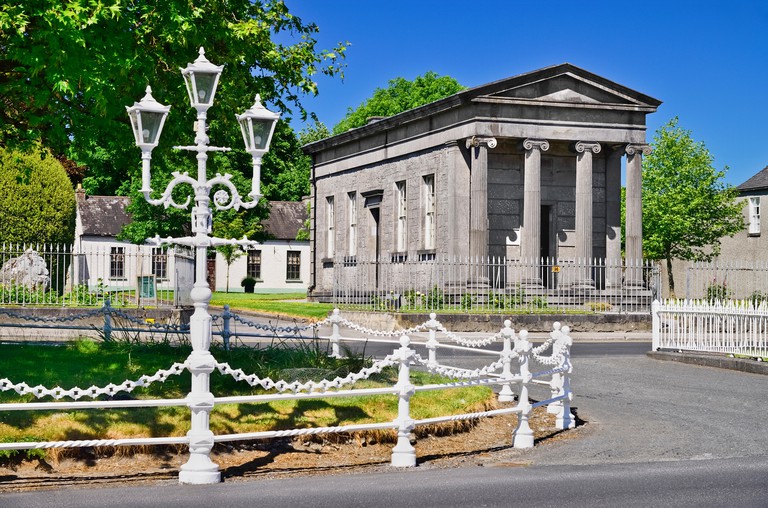 Birr is one of the most notable Georgian towns in Ireland and has been carefully preserved over the years. Wide streets and elegant buildings make this town a charming place to visit. The houses in John’s Place and on the Oxmantown Mall are good examples of Georgian fanlight windows. Emmet Square and Emmet Street have some of the earliest examples of Georgian-style buildings in the town. These are contrasted by John’s Hall, which is built in the style of a Greek temple. The monastery in the town was founded by St. Brendan and produced the famous Gospels of MacRegol. These can be seen in the Bodleian Library in Oxford. Other ancient artefacts in Birr include the Seffin Stone, which is said to mark the centre of Ireland. 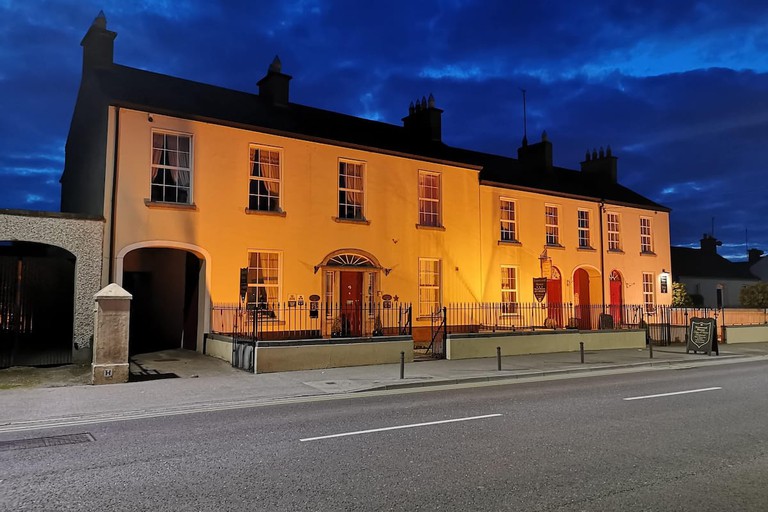 Housed in a Georgian building, and decorated accordingly, Townsend House in the vibrant town of Birr is a delightfully quaint B&B. It’s exactly what you’d want from a small-town stay with homely rooms, friendly staff and a delicious breakfast. Should you fancy a night in, the hotel serves an extensive tapas menu, alongside a series of cocktails and wines, allowing you a delicious dinner without even needing to step off the property. 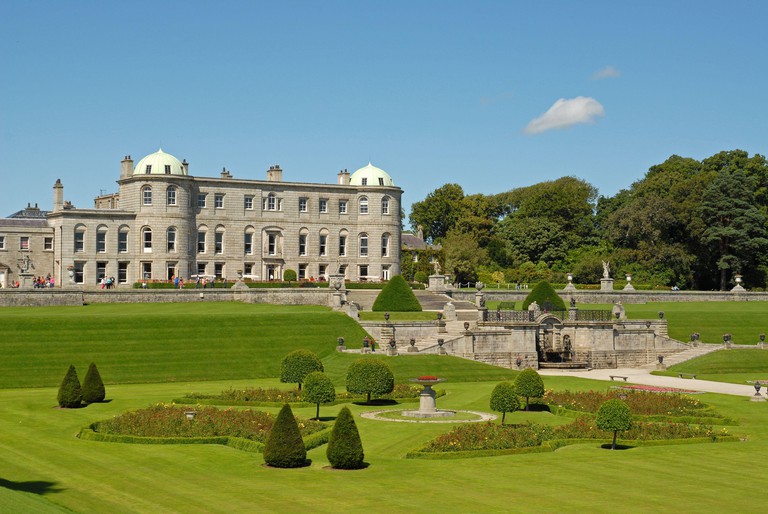 Enniskerry is a translation of ‘rugged ford’, and the town is located on the Glencullen River and at the foot of the Wicklow Mountains. The area is famous for the Powerscourt Estate, which comprises a large house and 47-acre (19ha) gardens. The house is built in the Palladian style and dates from the 18th century. The gardens were destroyed in a fire in 1974, but both the house and gardens were restored in 1996 to their former glory. Also located on the estate is the Powerscourt Waterfall, which is said to be the highest waterfall in Ireland, at 121m (396ft) high. 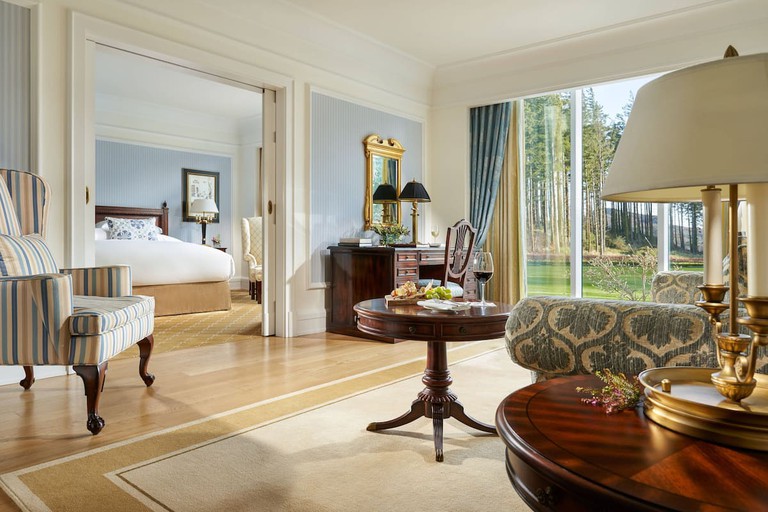 These are hotel rooms at their best: enormous, dreamy beds, pillowy duvets and sumptuous drapery in a palatial space. The bathtubs are big enough for two, and the romantic terraces off most rooms are delightful spots for a sunset drink while you bask in the country air. Access to award-winning golf courses, a fully-equipped fitness centre and a spa with an otherworldly lap pool means there’s lots onsite to keep you busy, and the three onsite restaurants shouldn’t be missed.