In the very heart of Edinburgh, a rusting set of wrought iron gates hold the key to five centuries worth of history. You need only know where to look… But with little to see from the exterior and a typically Victorian facçade, it’s easy to see why the Magdalen Chapel is often passed by in favour of more iconic Edinburgh sites.

After all, Edinburgh Castle, its various museums, and the Royal Mile all draw flocks of crowds to the city annually. But few people know of the little maze of streets a little away from the tourist hotspots, the and hidden gems of architecture they hide.

If you’re ever in the Cowgate area of the city (in which case you should also visit all of the Harry Potter locations in Edinburgh), then this little pre-reformation chapel is well worth a look around, if only for an hour or so. After all, underneath the gray exterior lies the oldest building on the street.

HISTORY OF THE MAGDALEN CHAPEL

The Mary Magdalen Chapel was built between 1541 and 1544 by Janet Rhynd, widow of Michael McQuhane. Following his death in 1537, McQuhane left money for the construction of this chapel. The purpose of the Magdalen Chapel was twofold; to serve as a place of worship, and to be the Guildhall for the incorporation/ Guild of Hammermen. The Hammermen were metal workers and following the death of Janet Rhynd in 1553, they took over the workings and runnings of the chapel and its associated buildings. 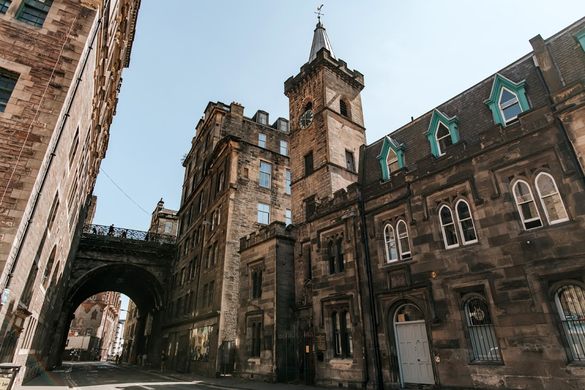 At the time of its construction, the building included an adjoining hospital, as well as an almshouse for seven men (accommodation for those who needed it most). There was also a room for a chaplain. Until the reformation of 1560, the chapel and Almshouse prospered.

However, it was at this time of reformation, that the Guild of Hammermen fell into legal troubles. This was both owing to the salary of the chapel’s chaplain and the fact that they wanted to transform the chapel into a Protestant place of worship rather than the Catholic place of worship that had been stipulated in Janet Rhynd’s will.

Although the Hammermen Guild survived the financial and legal troubles, they ultimately lost control of the chapel. It was during the reformation period that the chapel was also used for lectures on the reformation that was to come. In actual fact, it was in this very chapel that John Knox established the reformation in Scotland. REFORMATION AND THE MAGDALEN CHAPEL

The spire is a 17th-Century addition, as is much of the exterior. During the 17th-Century (covenanting times- that is to say the war between Protestants and Catholics), the chapel was used for several purposes. These included holding the bodies of several martyrs before their burial, as well as holding the heads and hands of martyred Covenantors before their burial at Greyfriars Kirkyard.

The chapel continued as a Protestant place of worship for the following centuries, albeit as a less important location in terms of politics and religion. Crumbling and neglected, the chapel was finally restored to its former glory in 1993. Ever since the 1990s, the chapel has been the headquarters for the Scottish Reformation Society.

Unsure as to what to expect, I entered the chapel interior with an open mind. And, to be honest, it wasn’t at all what I was expecting. For, if you look past the conference style chairs that now serve as the sole seating available in the little space, there is plenty of history to be discovered.

For starters, the wood panelling that you see in the picture below is 17th-Century documentation of the Covenanters that frequented the area. There are also many precious artifacts that are associated with the Guild of Hammermen, from a time when they owned the chapel. To the far end of the chapel, suspended in a glass setting of their own (presumably to both let light in and preserve them in the best way possible) sit four roundels of glass. These beautifully preserved stained glass panels are the oldest surviving medieval glass in all of Scotland. They are also the only surviving examples of pre-reformation glass, and somehow endured the destruction that this period wrought on historic buildings… Ready to visit? The chapel is open Tuesdays, Thursdays, and Fridays from 10 AM to 2 PM. A little sign on the façade suggests that viewings outside of these (admittedly inconvenient) times may well be possible. Pass through the iron gates, enter the foyer and a larger room becomes just about visible through the dimly lit interior… You’re in the chapel!

Reasons To Visit Edinburgh During The Christmas Holidays